Breaking Ground in Seattle with Good Shepherd and LiHi 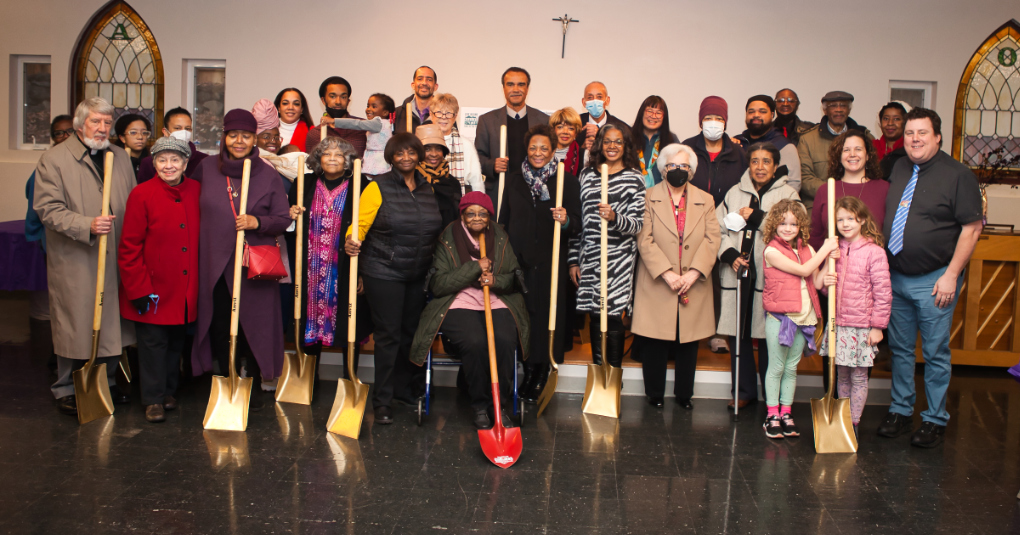 The Lutheran Church of the Good Shepherd in Seattle’s Central District has broken ground on a new affordable housing project, which, when completed, will contain 18 studio apartments for low-wage workers and 66 small efficiency dwelling units for homeless and economically displaced people. A building manager’s unit and office, as well as two case workers’ offices will be included.

The Lutheran Church of the Good Shepherd is partnering with the Low Income Housing Institute (LiHi), which is an important advocate for homeless people in the area. The building will be constructed by Walsh Construction Co. and was developed with Runber Architecture Group and 4EA Building Science. The project is adjacent to the Lutheran Church of the Good Shepherd. This project is the result of a years-long relationship between the church and LIHI. The site of the future building is the of LIHI’s first tiny house village, which opened there in 2015 and operated until 2020.

At the groundbreaking, Sharon Lee, director of LiHi, attributed the nationwide movement of tiny homes to the Lutheran Church of the Good Shepherd. She continued, “We value this partnership with the Lutheran Church of the Good Shepherd. We applaud the Church for leasing their land long-term to LIHI to create permanently affordable housing for vulnerable people who are unhoused or cost burdened. We are blessed with their compassionate leadership as other churches have sold their land to for-profit developers instead.” This project has been in development for years but was first announced in August of 2022. It is projected to be completed in spring 2024. One of the major hurtles this project needed to overcome was passing an ordinance on population density in the area. Adopted in June 2021, the ordinance provides development bonuses for affordable housing on property owned by religious organizations. It also allows additional height and floor area to create a greater number of homes if all housing created on the site is affordable to households earning up to 80% of area median income for at least 50 years. The Lutheran Church of the Good Shepherd worked hard to make this change possible.

Pastor Nathan Whittaker offered a prayer for the ceremony: “Loving Lord, we gather today with joyful hearts bursting with thanksgiving and gratitude for all you have done in and through us to get us to this moment. Use this building for decades to come to bring dignity and security to the homeless of our community as you prepare them for the next phase of their life. Most of all, we thank you for all those who are striving to solve the systemic problems that cause homelessness in our area, especially Sharon Lee and the many wonderful people at LiHi. Bring their work and the work of the countless others to completion so that Seattle may declare homelessness a problem of the past. Continue to bring this city and, specifically, the Central District together to fight the effects of gentrification, especially the skyrocketing costs of living, that bring about such homelessness.”

In attendance was long-time member, Mrs. Armstead, who has been at every groundbreaking of the congregation, including its dedication in 1962, its school opening and expansion, and its own expansion into a fellowship hall and kitchen. She had the honor of officially breaking ground for the project.

Pastor Steve Olsen, who began the journey with Good Shepherd to bring dignity and security to the homeless of Seattle, acknowledged the partnership with LiHi and wrote, “I thank God for all of you. Brenda and I join you in celebration. In the words of the Psalmist, ‘This is the LORD’s doing; it is marvelous in our eyes.’ As we look forward to the completion of this beautiful building and all our neighbors who will find a home here, we must also look back over the years and give thanks for the miraculous way in which God has guided our steps to this time and place. I am especially thankful for the courage and vision of the wonderful people in the Tent Camps and Tiny House Villages. May God continue to empower us all, in the Spirit of the Prophets, to believe and proclaim that HOUSING IS A HUMAN RIGHT!”

Click here and here for additional local media coverage of this groundbreaking.

The Lutheran Church of the Good Shepherd Seattle, Washington