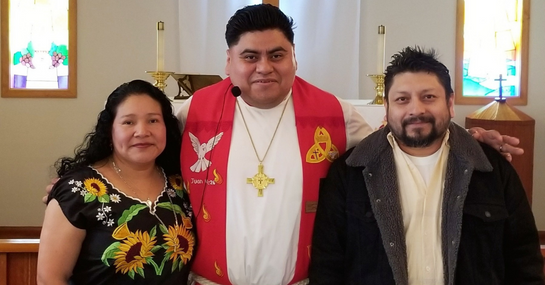 Lutheran Latino Ministries is an important partner of the NOW District. They work to connect people and resources for gospel outreach, train leaders, and provide culturally and linguistically accessible Word and Sacrament ministry.

At the 2022 NOW District Convention, we recognized LLM by passing Resolution 2-11, which included the directive “to commend to our district members and congregations generous support of the Lutheran Latino Ministries organization.” This affirms the work of LLM as worthy of support from all corners of the Northwest. In the coming months, we will highlight a few of these stories as examples of LLM’s impact.

What started out as a way to learn better English quickly blossomed into a role as a leader. Meet Angelica Juarez Ek. She is a member of Trinity Lutheran Church in Portland, who, through the encouragement and kindness of others, has become an important part of the ministry.

This all goes back more than 20 years, when Angelica began taking ESL classes offered at Trinity and her children were welcomed into Bible classes. It was from there that she was invited to attend church on Sunday. She and her husband liked it, and they became members. And everything else just stemmed from that.

Fred Kramer is a Trinity member who, along with his late wife Eunice, helped teach the ESL classes that Angelica attended. He has been an active supporter of Lutheran Latino Ministries for many years. He knows programs like this meet real needs in the community while also showing Jesus’ love.

“Angelica’s introduction to Trinity came through attendance at ESL,” he said. “When she arrived for the first time she brought her two young boys with her, as is the custom of Latino parents. My wife, Eunice, met her and suggested that the children attend the children’s Bible story class, during ESL time. Angelica wasn’t sure. Eunice invited Angelica to visit the class. She did. Eunice had a special love for and interest in children. After the class Angelica said, ‘How beautifully she teaches children. I wonder if I could learn to teach like that some day.’ Through Eunice’s coaching, Angelica became a successful Bible story teacher.”

“I like to help other students, other people to learn. And that helped me to learn more,” she said. “Every time when I came to church and I met older members of the church, it really motivated me that people welcomed me and made me feel good. They were so, so nice. That made me feel good in the church.”

Angelica and her family started by going to the English service because there wasn’t a Spanish option at that time. It was hard at first not knowing the language, but she learned more and was able to talk to more people.

“And then members of the church encouraged my family — And especially the Kramers. I thank God that I met them because I learned so much from them. For me, they are like when parents are teaching their kids to learn. They taught me so much, and they encouraged me.”

Kramer said Angelica is a bright spot in his life. He described her as “sheer joy. She is always smiling, cheerful, enthusiastic, positive and ready to take on a new challenge or opportunity.”

“Angelica and Edgar (Edgar Burgos Lavadoras – read his story here), and others, bring something fresh and new to Gospel outreach,” Kramer said. “For many of us, Christianity has become routine. We attend church. We make financial contributions. We serve as officers or on committees or sing in the choir. Those aren’t bad routines. With some people with new insights into the Gospel message, sharing the message with others involves an urgency and commitment that is refreshing to see.”

Angelica is active in the LWML, has served on Trinity’s Board of Mission and Outreach for 10 years, and was part of multiple call committees. After a while she started helping at the food bank that Trinity had at the time. Kramer encouraged her to do this. Despite initially being hesitant, she later became coordinator. She was also actively involved in the Community Care Project that was funded in part by a NOW District COVID-19 Community Care Grant this past May (read the story here).

“Over the years, Trinity has served its Latino neighbors in a variety of ways: ESL, food program, Thanksgiving boxes, Christmas gifts, English summer school for children, pastoral counseling, assistance in immigration and family turmoil and abuse matters. When individuals canvass the neighborhood and ask about Trinity, they invariably receive positive answers. God’s name is being glorified,” he said.

He also notes how much of a resource LLM is for congregations that offer similar outreach opportunities.

“The Pacific Northwest is richly blessed to have LLM in its midst. Any church interested in outreach to Latinos has this excellent resource for information, encouragement, and support. The Latino people come to realize that they are part of something bigger than a small group at a local church. (LLM President) Pam Bridgehouse’s love for the people and the work, her skills, her dedication and boundless energy are an unusual gift from God. May he continue to bless and sustain her, and to raise up others like her,” Kramer said. “Latino people are increasingly involved. That’s good.”

“Since early in her association with Trinity, Portland, she has stepped up to leadership roles and responsibilities when encouraged by Fred and Eunice Kramer and others in the congregation. She completed the 10 entry-level seminary classes and works well with children, is active in Trinity’s LWML Dorcas Society, helps to lead the music, and is willing to do nearly anything that needs to be done,” Bridgehouse noted. “She recently accompanied Pastor Zabdi Lopez to assist with mission outreach through Bethlehem Lutheran in Yakima, Washington.”

Angelica is hopeful for the future of the church, but she knows hard work is needed to reach others in the community. One thing that will help is a collaborative effort.

Find out more on LLM here.